Everyone loves a new car….what’s not to love?  It smells good, it’s clean, it’s like a new toy!  I recently had the chance to drive the new 2013 Ford Escape.  Talk about a new toy!!  (Not to mention it was fully loaded…score!) 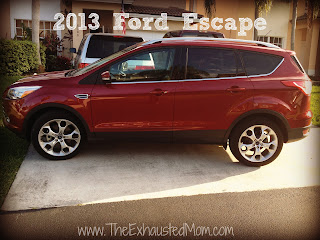 The Escape is a great family car with a roomy interior that seats 5 comfortably with plenty of leg room.  It was kind of weird for us to be so close together in a car because we are used to our minivan, but I liked that we could reach each other.  This really came in handy when one day “Little Ricky” had a nose bleed while we were driving! (Never a dull moment…) 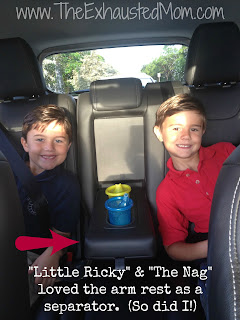 The trunk space was great!  We loaded it with our purchases from Target, where we NEVER leave with a just a few items.  “The Nag” had his birthday party and we were easily able to load everything we needed.  There was even a trunk cover to hide items from prying eyes….love it!  And speaking of the trunk, the coolest thing ever….it had a foot-activated liftgate.  When my arms were loaded, I could just wave my foot under the trunk and voila, it magically opened!

The Escape had other magical features as well.  It has intelligent access…you know the key fob that only has to be on your body in order to open the door…no more pushing the button for unlock.  All I had to do was walk up to the car and it unlocked.  Not to mention the push button start.  I never had to find my keys….awesome!

My favorite feature?  The message letting me know how many miles until empty.  I know it’s a bad habit, but I continue to drive when the arrow is on red.  In my own defense, I am usually running late and can’t stop at the gas station until after work.  While we are on the topic of gas, the Escape has EcoBoost technology.  I didn’t have to fill up for MANY miles (and I have a long commute each day).

The Escape was equipped with SYNC technology with MyFord Touch.  You never have to take your eyes off the road to find a song on your synced iPod or to call your husband when you’re on the way to the store.  Just speak your command to SYNC and your wish is the car’s demand! 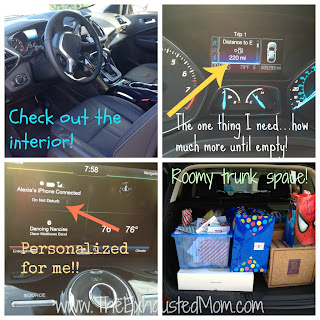 My family and I loved driving the new 2013 Ford Escape and became a little pampered by all of the new features that it had.  It was really hard climbing back into our 2008 minivan…

If you’re looking for an SUV that’s not too big in size, but knows how to pack in the perks, check out the 2013 Ford Escape!


***Disclosure: The vehicle was provided at no charge for a week. No commitment to review the vehicle was made. All opinions are my own.